ARMA International’s highest recognition is to be named to its Company of Fellows. This award honors ARMA members who have distinguished themselves through outstanding achievements and contributions in information management, as well as through noteworthy accomplishments in all levels of the association. This year’s two inductees bring the total number of Fellows of ARMA International (FAIs) to 60.

With her zeal for helping her peers advance their careers and making her ARMA chapters excel, Anita P. Castora, IGP, CRM, CBCP, FAI, has made an indelible impression on her colleagues, her profession, and her professional association. Her recent involvement with reviving the Jacksonville (Florida) Chapter, where she is now president, follows her service as president for no less than four other chapters (Connecticut, Stamford-White Plains, Cleveland, and Akron/Canton) and terms in other board positions for these and for the Orlando and Metropolitan New York City chapters.

Castora is a regular speaker at all association levels, has organized study groups and served as a mentor for those studying for the CRM certification, has been instrumental in organizing chapter and regional conferences, led the ARMA International Environmental industry-specific group for five years, and led the workgroup that developed ARMA’s Contracted Destruction for Records and Information Media. Castora, an Information Governance Professional, Certified Records Management, Certified Business Continuity Professional, and Fellow of ARMA International, is records manager for Jabil, which is headquartered in St. Petersburg, Florida.

Over the past two decades, Melissa G. Dederer, IGP, CRM, FAI, “has consistently contributed on a committed and passionate level to the betterment of the profession and the association,” one of her nominators wrote.

At the international level, Dederer has served on the ARMA International Board of Directors, contributed to Information Management magazine and its predecessors, and written and edited several courses for the RIM 101 training series. She also has offered her expertise as a speaker at all levels and has been instrumental in organizing many regional conferences.

After serving many terms on the boards of directors for the Metropolitan New York City and Connecticut chapters, Dederer was credited by one of her nominators as taking one chapter “from mediocrity and questionable financial status to a very successful and active organization” while she was its president.

It is through these actions, Dederer has earned the praise from one of her nominators as being a “champion” of her profession. She continues in this role in her current employment as an independent consultant. Dederer is an Information Governance Professional, Certified Records Manager, and Fellow of ARMA International.

The Britt Literary Award, which was instituted in 1967 in memory of John F. X. Britt, one of the early pioneers in the modern information management profession, is given to the author of the best feature article appearing in Information Management magazine during the previous fiscal year.

This year’s Britt Literary Award winner is Victoria L. Lemieux, Ph.D., CISSP, for writing “Blockchain Recordkeeping: A SWOT Analysis,” which was published in the November/December 2017 issue of Information Management magazine.

Judges agreed that Lemieux’s clear writing style and good choice of graphics enable readers to understand the aspects of a complex topic. They called it an enlightening and thought-provoking article that shows the promise of blockchain in but also highlights the challenges that remain to be addressed in its use.

Member of the Year Award

Four members of the year were recognized for their participation in supporting and promoting ARMA International’s mission and vision and contributing to their chapter’s or region’s success.

The Chapter Luminary Award recognizes chapters that have inspired or influenced others with their excellence and accomplishments in introducing products or services for its members, developing more efficient and cost-effective services, providing relevant and timely ideas and assistance to ARMA headquarters to advance the profession, promoting ARMA’s strategic goals and objectives, or sharing resources that help other chapters and regions to flourish.

Excellence for an Organization Award

The City of Brampton (Ontario, Canada) was recognized for its achievements in enhancing its information governance (IG) program as laid out by the Generally Accepted Recordkeeping Principles® and the IG Maturity Model (IGMM). According to the nomination, Brampton is either at the Level 4 – (proactive) level of maturity or one step lower, Level 3 – (essential) for each Principle, as measured against the IGMM.

The Pittsburgh Chapter and the Western Michigan Chapter won this year’s Standing Ovation Award, which recognizes the accomplishments of any chapter, region, or individual that has taken an outstanding or unique approach to furthering ARMA International’s vision and mission and illustrating the “Who We Are” of ARMA International by enhancing the records management or information governance professions. 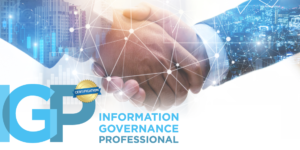