This is the second article of a four-part series on drafting requirements in IM policies, looking at the problems of using the words “must,” “may,” and “should.”(Read Part 1 here.)

In traditional policy wording, writers use “must” to indicate that a requirement is mandatory, for example:

When the fire alarm rings, employees must exit the building.

The word “must” in this statement creates an obligation on one or more people. We can confirm that interpretation by testing how the sentence reads when the notion of obligation is made explicit:

When the fire alarm rings, employees are obligated to exit the building.

That is the plain and simple meaning of “must.” And if “must” always expanded to “are obligated to,” we’d have no problem. But the word “must” has other meanings. Besides creating an obligation, policy writers use it to:

No one likes being ordered to do something. A mandatory requirement can be reworded to avoid both the ambiguity and the bossy overtones of the word “must” by declaring the authority, eligibility, or entitlement directly.

Look at the following example:

Disposition of records must be approved by the vice-president.

We don’t mean to obligate the vice-president to sign something here. When we step back and try to figure out exactly what the mandatory portion is, we have to dig for it.

One interpretation of the statement is that when records are ready for disposition and a signature is required, that signature must come from the vice-president.

If that’s what was intended by the drafters, then the statement is actually about authority rather than obligation. The intent is to give the vice-president the sole authority to approve the disposition. Spelling that out clearly instead of merely implying it produces this statement:

The vice-president has the sole authority to approve the disposition of records.

With this re-wording, we have completely bypassed the distinction between mandatory and optional, and it is now much clearer exactly how the rule applies. We’re not obligating anybody to do anything; we’re granting an authority to an individual who can choose when to exercise it.

An alternate interpretation of the example is that it mandates the order of events in the process. The statement makes the vice-president’s approval a pre-condition to moving on to the next step, disposition. In this case the statement is actually about eligibility rather than obligation. It means that the records are eligible for disposition only after the vice-president’s approval has been given. So let’s say that:

Records are eligible for disposition upon approval by the vice-president.

In this rewording, just like the previous one, we’re not telling anybody that they areobligated to do anything. By setting a precondition to eligibility, we’re able to maintain the strictness of the rule without using the word “must.”

Many policy statements use “must” improperly in this way. Take another example:

Employees must be given access to their own personnel files upon request.

This statement is not about obligation; employees are not obligated to look at their files. If anyone is obligated here, it would be the keeper of the files, e.g., the records managers, who are obligated to produce them upon the employees’ requests (Yet, those keepers aren’t even mentioned in the statement!).

This statement is really about entitlementrather than obligation; employees who wish to see their files are entitledto see them. Instead of a mandatory instruction, this statement is better worded as follows:

Employees are entitled to have access to their own personnel files.

Policies should assume that people — in this case, the records managers — want to do the right thing. When someone entitled to see a file asks for it, the records office will happily oblige. We don’t need a policy statement requiring them to do that.

Virtually all uses of the word “must” do one or more of the following:

When setting out a mandatory requirement, we can avoid both the ambiguity and the bossy overtones of the word “must” simply by declaring the authority, eligibility, or entitlement directly.

The vice-president has the sole authority to approve the disposition of records.

Records are eligible for disposition upon approval by the vice-president.

Employees are entitled to have access to their own personnel files.

With this wording, we are no longer instructing people what to do and no longer dividing the office into rule makers and rule followers. We have gotten rid of the Parent-Child dynamic entirely. 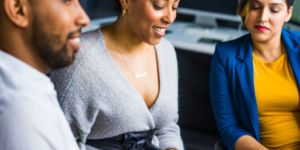 by William Saffady, Ph.D, FAI
Antiquated Policy Wording: “Must,” “May,” and “Should”