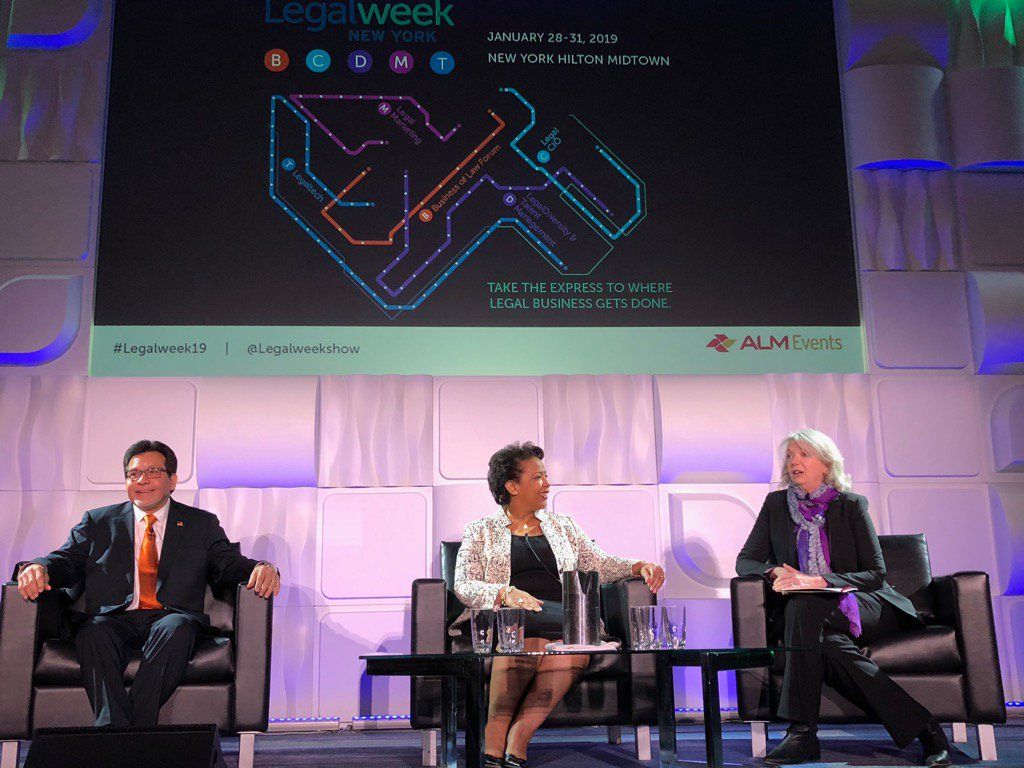 Former attorneys general Albert Gonzalez and Loretta Lynch spoke frankly in a discussion attended primarily by attorneys and moderated by ALM’s Molly Miller. (ARMA International, a track sponsor of Legalweek 2019, was represented in the audience as well.)

Miller, the chief content officer for ALM, asked Gonzalez and Lynch to describe what the U.S. government should be most worried about today. Both former officials responded without hesitation that cybersecurity was the most pressing threat.

Gonzalez had earlier noted that there’s a “cyber component” to nearly every case these days: “The computer is often the means of carrying out the crime,” he said.”

Accordingly, Lynch encouraged attorneys to better acquaint themselves with technology. “You don’t have to be the IT guy, but we need to train lawyers to have mental flexibility and become comfortable with technology,” she said.

The topic of privacy led to a discussion about the Justice Department’s suit against Apple for refusing to help disclose data on the encrypted iPhone that belonged to the 2015 San Bernardino mass shooter. Lynch said that “Technology companies don’t get to decide for all of us how we control and access our data. People have ceded more control of very private data to industry without even thinking about it than I could ever get as part of the government.”

Gonzalez served from 2005 to 2007, during the second term of the George W. Bush administration. Lynch served during the final two years of the Obama presidency.

The ARMA International track at Legalweek 2019 is called “Innovative IG,” and it consists of three sessions on Thursday of this week. For more details, see the news article. We will also be hosting a Legaltech Rewind webinar pulling together some highlights from the ARMA track, registration is now available and open to all.